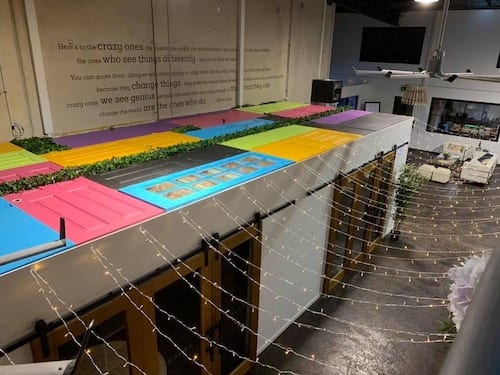 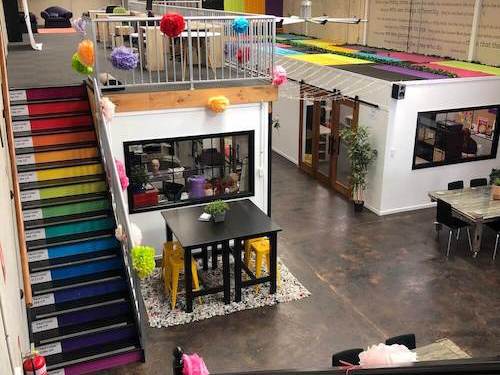 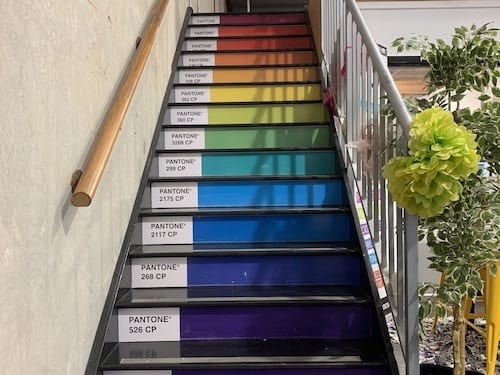 Engage and collaborate with visionary business owners in a kick-ass shared office space.

The Creative Fringe is more than a shared office space for business owners and commuters. We are a dynamic community that thrives on innovation. That fosters collaboration. That builds strong businesses. Hi, my name is Debbie O’Connor. I’m a brand strategist and the creative director and founder of Penrith’s most awarded creative studio, White River Design (WRD). The idea of The Creative Fringe was a seed in the back of my mind 10 years prior to us opening our doors.

I grew up in a close-knit South African bush town called White River (see the connection?) The community was connected, engaged and always willing to help. These values have been core to everything that I do. But after travelling the world for three and a half years, I realised that the community connectedness that I was brought up in, was not commonplace. In fact, in most places it was non existent.

I settled in Australia after marrying my Australian husband, David. I worked as a graphic designer before falling pregnant with my first child. It was at this point that my employer refused to offer me maternity leave, and in an attempt to keep my creative skills up to date, I registered White River Design as a business. As they say, ‘the rest is history’.

Well, not quite. Over the next 10 years I experienced multiple ‘pain points’ in my business that started me thinking more and more about creating a co-working space that would help others easily overcome what I had experienced.

Initially WRD was run from a back room of our house. Not having any contacts in Australia and only knowing David’s family, I felt the pinch of isolation. After starting to network, I found that I was not alone. Many home based business owners were experiencing the same challenges. Lack of motivation, disconnect, procrastination and not being taken seriously by clients, who when they heard that I worked from home would try and beat my price down.

The business grew and WRD took on staff and took over the lounge! Trying to keep the house clean and quiet with children around was just one challenge. Having people in my home 5 days a week, not much privacy and never a day off from work was challenging. It was hard on staff too, who were incredibly respectful but they had to walk through my door, use my kitchen, my kettle and my milk just to make a cup of tea.

8 years of running a home business was enough. My children were now going to school and their home was no longer a home. It was time to find premises.

The hunt was on, and it was frightening! Everyone wanted me to sign a 2-3 year lease, pay a months bond and finance a fit-out. I didn’t know where my business would be at the end of 1 year let alone 3! I was able to secure a space that allowed me to have a month by month lease, which was great, but I had no idea that the fitout would cost $30,000!

We moved in with 2 staff and three years later we had 6! Premises had been great for business but now we had outgrown our space. This was the perfect opportunity for that seed of a thought to be planted. The hunt for new premises was on! As we work with so many business on a daily basis – copywriters, photographers, accountants etc) I wanted to create a space where we could all work under one roof. I wanted to take ‘the pain’ out of running a business,whether home based or ready for premises. A space that is already fitted out and can easily be moved into. A space where there is no long term lease or commitment.

But most of all, I wanted a community like the one that I grew up in. A community where everyone collaborated, networked and helped each other for the collective good. This became my mission and is how and why The Creative Fringe came to life.

Why cowork with us?

We step beyond the boundaries of conventional thinking, where we connect a diverse range of freelancers, consultants and small business operators through our amazing community. This helps connect people, encourages collaboration and assists in growing business. The Creative Fringe is far more than simply a desk to hire.

Penrith might be on the fringe of Sydney, but The Creative Fringe is a game changer – we are leading the way, no longer on the outskirts of creative and technical development. For the first time, Western Sydney and Blue Mountains businesses have access to an amazing coworking space and creative business development concepts that are world-standard.

Our coworkers assist each other in deliverying solutions, as well as providing inspiration and education. We provide an open plan office space ready for collaboration and brainstorming – were our members can create and leverage off one another. To learn. To be inspired – for a day, a week, a month or a year.

It’s your business. Your brand. Your project. Your reputation.

It’s not the time to play it safe.

It’s time to push the boundaries and take your business or creative project further than you’ve ever been before.

Our door is always open. You just need to step inside.

Check us out on the ‘gram